The congregation of Merciful Brothers in Bratislava prepared a new project, inviting also the public. With a cycle of summer evening concerts the friars want to gain financial resources for the renovation of the organ in their Church of the Visitation of Mary in Bratislava.

„The organ was built at the end of the 18th century by an unknown organ builder. In the 20th century the company Rieger rebuilt it for the purpose of „modernisation “. The organ casing is preserved, however the disposition of the organ interior was changed. It is a pneumatic organ. This type of instrument relatively often experiences breakdowns, which must be solved,“ said the organist Lukáš Kunst. Until now a greater repair of the organ was not accomplished because of its financial demands. „The goal is to gain financial resources for a general reconstruction of the organ, which is currently in emergency conditions and functioning at 30 percent, often only in good weather. Namely the humidity has effect on the used up parts of the organ. Thanks to the repair it will not only raise the liturgy, what is its main task, but Bratislava will also gain another „instrument of kings“, which can be used for concerts,“ closed the organist Lukáš Kunst.

The renovation of the organ can be supported by a voluntary entrance fee. 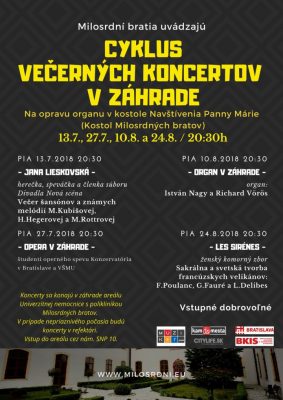