Bratislava will host an important sports event at the end of August – the best Woman’s European volleyball players will come to play at the Ondrej Nepela Winter Stadium in Slovakia. The CEV EuroVolley will be held in Slovakia for the first time in history. After ten years-long break, this will already be the fourth time our volleyball players, now coached by the Italian coach Marco Fenoglio, will attend the European Championship (2003, 2007, 2009, 2019).

This year’s European Championship is special for two reasons – for the first time the event will be held in four countries (Slovakia, Turkey, Poland, Hungary) and it will be attended by a record number of teams (24).

Slovaks will meet with Russia, Germany, Belarus, Spain and Switzerland in the basic D-group. Our girls will introduce themselves on Friday, August 23 in the match against the Spanish, and a day after that they will meet with the Swiss. After a day off, Slovaks will meet on Monday with the Belarusians and on Tuesday with the Germans. The final match awaits them on Thursday when Slovaks will stand against the group’s favorites, the Russians, after a day off. The first four matches of the SR will start at 8:00 PM, the last match is scheduled at 3:30 PM.

The European Championships will take place in Bratislava, Ankara, Lodz and Budapest. In eight- final rounds, only one match is played by each country. Each country hosts two eight-final rounds, quater-finals are held in Turkey and Poland, semi-finals and medal matches in Ankara. The ambassador of the European Championship in Bratislava is Adriana Marčeková, the holder of six awards “Volleyball player of the year” six-time Slovak volleyball player. She also drew lots for group ranking in Istanbul.

Framework program of the Championship: 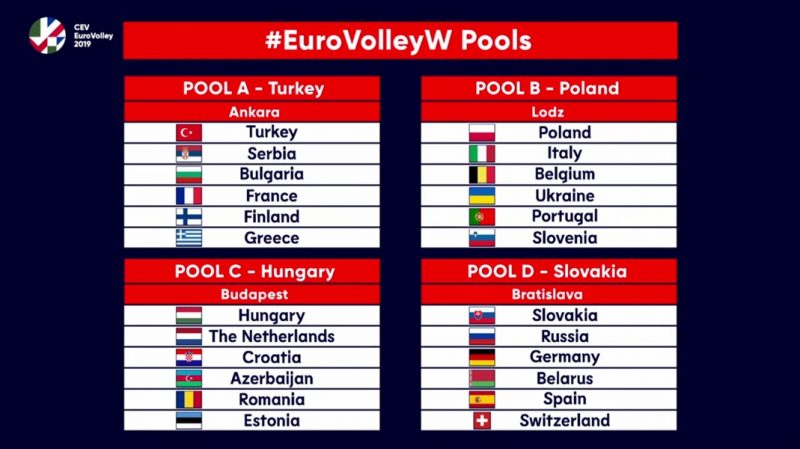