After the successfully sold out concert Tribute to Vivaldi, Hilaris Chamber Orchestra presents another attractive project – the Christmas Concert. At the concert led by Alan Vizvary, the founder and leader of Hilaris Chamber Orchestra, will resound beautiful and colourful pieces  by prominent music composers such as Johann Sebastian Bach, Antonio Vivaldi, Arcangelo Corelli and Wolfgang Amadeus Mozart. Since it will be a Christmas concert, traditional Slovak and foreign Christmas carols are also included in the programme.

The Christmas Concert of Hilaris Chamber Orchestra at 6 pm is sold out! Due to great interest there will be another Christmas Concert added at the same day 16th December 2018 at 3:30 pm in the Mirror Hall of the Primate’s Palace in Bratislava.

The concert was financially supported by the municipality Bratislava – Staré Mesto. 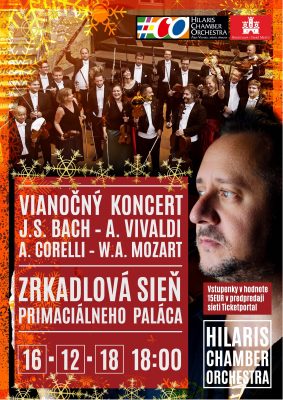