What will happen in Bratislava from 15th February onwards?

From February 15, Mlynské Nivy Street and some driveways from Prístavný Bridge to Slovnaft and Prístavná Street will be completely closed for six months. This will have a significant negative impact on traffic in the eastern part of Bratislava.

The more drivers take advantage of the public transportation, the less time those who really need to use the car spend in traffic jams. We can do it together!

The most important change in the public transport at times of traffic restrictions will be the bus lanes on Gagarinova Street in direction in and out of the city and the bypass route of Mlynská Niva Street – Páričková Street in both directions. Thanks to this, the public transport will become the fastest way of transportation in all critical sections during that time. All details will be regularly put on the website of the Bratislava Transport Company.

From Monday, 18 February until the end of March, all rides on lines 201, 202, 212, 75 and X72 will be free. In addition, the BID offers at this time also a 50% discount on the weekly bus ticket (you can purchase the ticket through IDS BK App for iOS or Android – payment via card only).

With regard to traffic restrictions taking place from 15 February 2019, we recommend that you use the following public transport lines in the area of PRIEVOZ roundabout:

With respect to traffic restrictions taking place from 15.2.2019 in the area MLYNSKÉ NIVY, the following changes will apply: 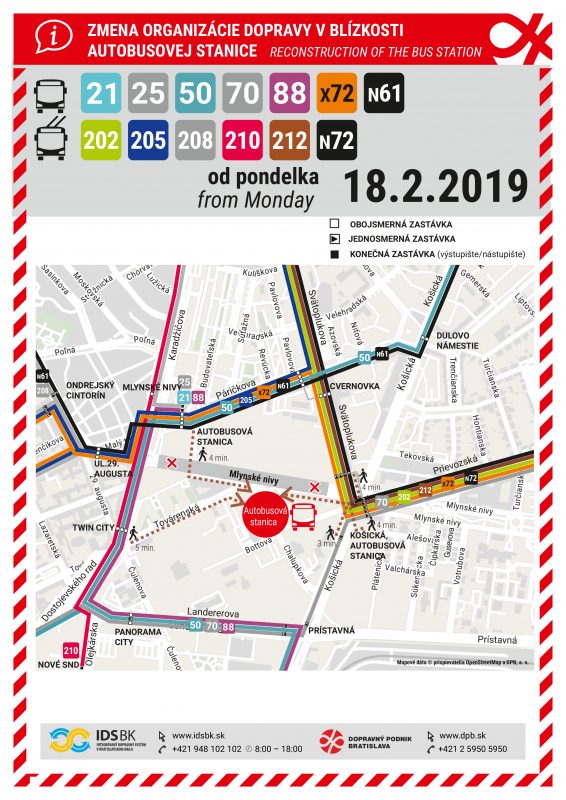