The Primatial Palace (1778-1781) was built on property originally belonging to the archbishop of Esztergom. The facade of the palace is in strictly classical style.

The Primate’s Palace is one of the most beautiful classicist buildings in Slovakia. Portraits of Hungarian rulers are exhibited in the picture gallery. An impressive part of the gallery is a collection of six tapestries found in the reconstruction of the palace. The Hall of Mirrors is also representative along with five salons furnished with period furniture and named after the color of the walls – green, brown, blue, red and gold.

On the roof are allegorical statues by J. Kögler and F. Prokop as well as vases by J. A. Messerschmidt. Atop the tympanum is the coat of arms of Cardinal Jozef Batthyányi, the first occupant of the palace; an iron model of his hat, weighing 150kg, crowns the building.

The allegorical statutes along the roofline were intended to represent the cardinal’s human qualities and achievements. The Treat of Bratislava between France and Austria was signed in the palace’s Hall of Mirrors on 26 December, 1805. Today the palace is the office of the mayor of Bratislava, and the superb Hall of Mirrors is now used to host concerts.

The palace also contains a rare collection of English tapestries from the 17th century. They were produced at the royal tapestry works in the English town of Mortlake, but were only rediscovered during a reconstruction in 1903, and are undoubtedly worth a visit. The exquisite fountain of St George, depicting the legendary knight slaying the dragon, stands in the square inner courtyard of the Primate’s Palace. According to one legend the figure of St George represents the archbishop, and his fight with the dragon symbolises the efforts of the Catholic Church to banish the Reformation from the city. Legend has it that St George saved the virgin Dubravka from the dragon, and as a reward gained her hand in marriage. Each year, on St George’s Day, the stone statue is suppose to come to life, turn around on his horse and bow to the inhabitants of the city.

END_OF_DOCUMENT_TOKEN_TO_BE_REPLACED 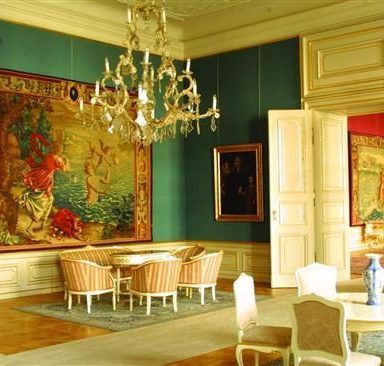