The festival will be opened by the concert of the top old jazz ensemble Fats Jazz Band, the leader of which is one of the most universal Slovak musicians Ladislav Fančovič. Fats Jazz Band performs a programme, which they have prepared last year on commission of the Bratislava Organ Festival – the repertoire of Fats Waller, the first jazzman, who started to experiment with classical organ. Last year it was possible to realize the project only on an electric organ, however, this time it will resound in full beauty and really authentic sound on the big organ in the Slovak Radio, moreover with extraordinary period arrangements of classical music for a swing orchestra.

The Hungarian multi-instrumentalist Balázs Dongó Szokolay, wind instrument player, cooperated already twice with the organist László Fassang in the crossover projects of the Bratislava Organ Festival. This time he brings his own project of transcriptions of pieces by Béla Bartók and Zoltán Kodály for folk wind instruments and piano. The programme connects the delicate atmosphere of a classical chamber concert with the spontaneity of a virtuoso player from the sphere of folk music.

A further project on commission of the Bratislava Crossover Festival combines two programmes: folk ballads with the PaCoRa Trio and a selection from the Bartók repertoire, which has been recorded by the Mucha Quartet together with Iva Bittová at the famous CD Slovak Songs. Transcriptions of Bartók‘s mostly piano works on the topic of Slovak folk music for a voice and a string quartet written by Vladimír Godár are concerned. The soloist of the programme, the well-known folk music singer Slávka Zápotočná-Horváthová –cooperating with the Slovak Radio Folk Instruments Orchestra OĽUN, and also a member of the a capella group Sklo – brings a new interpretation view of Godár’s transcriptions of Bartók. Their common project with the PaCoRa Trio is an insight into the world of world music and a demonstration of a different arrangement of folk material.

Ladislav Fančovič will not only open the festival as bandleader, pianist and jazz organist, but will also close it, and once again in an atypical role. Together with one of our major violinists Milan Paľa they will prepare an extraordinary programme for the Bratislava Crossover Festival, perfectly fulfilling the second dramaturgical line of the festival – provocative dramaturgical projects. They will perform the transcriptions of Bach‘s Cello Sonatas, whereby none of them will play his „main“ instrument: Ladislav Fančovič will introduce himself as saxophonist and in the hands of Milan Paľa will appear an instrument, which was constructed especially for him – a combination of violin and viola carrying the name milanolo.

Main organiser: civic association ORGANYzácia
The festival was supported by: Slovak Arts Council, which is the main partner of the festival 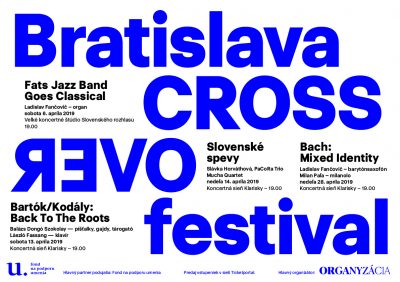