We would like to invite you to the first this year’s concert of the cycle Albrechtina – (Un)Known Music to the 100th anniversary of birth of Hansi Albrecht (7th January 1919 – 20th November 1996), the prominent teacher, musicologist and founder of the Musica Aeterna ensemble.

The violist Martin Ruman with piano accompaniment by Alena Hučková will introduce you into Hansi’s favourite music by interpretation of pieces by Alexander Albrecht, Zoltán Kodály, Leo Weiner and Franz Liszt. 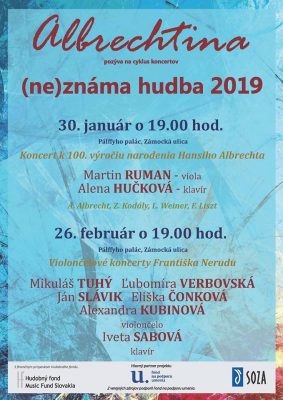