The biggest city festival Cultural Summer and Castle Festival 2019 in Bratislava will bring along a multi-genre program for residents as well as summer visitors to the capital city.

The program will take place in the streets, parks and gardens, in the courtyards, on the banks of the Danube, but also in the various city districts, and will surely please every age group as well as fans of different genres.

JUNE CELEBRATIONS ON THE MAIN SQUARE

The afternoon full of dancing and folklore, a flood of colorful folk costumes and children’s singing from all over Slovakia, Austria and Russia – that is the 22nd annual International Festival of Children’s Folk Ensembles at the Main Square (June 8).

Celebrate the Day of Music –June 21, inspired by the international Fête de la musique, with the Music Center. You can look forward to music of all styles and genres played not only by professional but also by semi-professional artists.

In June, friends and readers of the magazine Slovenka (11 June) will meet at the Main Square. Fashion enthusiasts will surely enjoy the summer edition of the magazine devoted to Bratislava Fashion Days – Fashion in the City (June 20). An unconventional open-air fashion show will present summer creations of dozens of Slovak fashion designers and brands focusing on accessories and fashion for children and women.

BRATISLAVA WILL WELCOME A LOT OF INTERNATIONAL GUESTS

A part of the International Choir Festival (June 13-16) is also a choir competition, performances during the Masses, as well as festival concerts in the Church of Poor Claresand the Primate’s Palace. You will get the chance to see 14 choirs from 7 countries: USA, Finland, Singapore, Norway, Czech Republic, Latvia and Slovakia.

The renowned Guitar Festival of J.K. Mertz (16-22 June) has been bringing the best guitar art to the audience for 44 years. You can look forward to top players from 9 countries, soloists and various chamber groups. The event will be dominated by a classic guitar, but old music and jazz will also be heard. The top headliner is Sting’s court lutnist Edin Karamazov.

Thanks to the event International Bratislava, we will get to know and experience the arts and traditions of various cultures at the Main Square and in the Old Town Hall. You can look forward to Japanese Day (6.7.), French Day (12.7.), Irish Day (17.7.), Turkish Day (20.7.) And Indonesian Day (24.8.). Especially intense will be the Asian Weekend (2.8. -3.8.), through which we will get to know the art as well as the gastronomy of China, India, Indonesia, Japan, South Korea and Vietnam.

The accompanying program for the 4th annualcelebration of the Foreign Slovaks Day will take place on July 5. For example, folklore ensembles from Melbourne, Croatia, the Czech Republic, Montenegro, Serbia, Ukraine, as well as the Šarišan Children’s Folklore Ensemble from Detroit, USA.

THE CULTURAL SUMMER IS ALSO OPEN FOR CHARITY PROJECTS

Once again, the breathtaking space of the Paradise Garden at the Merciful Brothers will be opened to the public, where, after the extraordinary success of the last year’s event, the series of chamber concerts will continue.

As part of the traditional series of summer charity concerts of the 17th annual Na kolesách proti rakovine (On Wheels Against Cancer), the New England Conservatory Youth Philharmonic Orchestra (USA) will visit the Great Chamber Studio of the Slovak Radioon June 23. In August (2.8.), the London School Symphony Orchestra (GB) under the baton of the conductor Peter Ash will perform.

Koncert pre nádej (Concert for Hope) held on July 10 is an unconventional and unique event combiningfeatures of a motivational event and art therapy. The event is organized in cooperation with O.Z. Ambrelo and supported bythe renowned and visually impaired tenor Maroš Bangowho will entertain the audience with a rich program full of famous opera and operetta arias, as well as popular songs.

The 10th international multi-genre festival Cigánsky bašavel(Gipsy Bashavel) will take place in the beautiful surroundings of Devín Castle on August 24. You will be greeted with passionate Roma songs, traditional Roma dishes, the best of Roma culture and art. Both foreign and domestic Roma bands as well as talented Roma childrenwill perform at the event.

As part of the project Živé námestia (Squares Full of Life), a cultural program and artistic performances on both squares will contribute to the revitalization of the SNP Square and Kamenné Square, the aim of which is to become a pleasant place for their residents and visitors alike. One of the first events held there is Express! in Bratislava (June 15), a competition of slam poetry in English.

An exceptional moment to look forward to is the performance of the first Afghan girls’ orchestra – Ensemble Zohra (July 28), which will also perform at the largest festival in Slovakia – Pohoda. In its 2017 concert, the orchestra wrapped up the annual World Economic Forum Annual Meeting in Davos, Switzerland, and immediately received huge media attention from BBC, NPR, The New York Times and many others.

The 30-member band from Finland – The Great Ukulule Orchestra of Tampere is set to perform on July 28.With all the members playing famous hits on ukulele, your mind starts to wonder whether what you see is really true.

The 12th annual Gypsy Fest – World Roma Fest will be held on July 25 to 27in cooperation with OZ Roma Production. TheMain Square will welcome artists like Gipsy Boys Ulak, Gipsy Causal from Romania and pop icons Igor KmeťoJr. and his guests: Anita Soul, Rytmus, Majk Spirit, Monika Bagárová. Prepare your dancing shoes as you will dance!

Apart from being one of the most popular jazz festivals in Europe, the 11th annual One Day Jazz Festival is will introduce Ari Hoenig Trio (USA) together with Martin Valihora Project and Jana Govačová(SK) on June 24.

The International Youth Music Festival (July 3 – July 4, July 22 – July 25) brings to the city outstanding music projects. The event is full of concerts for children, performances of youth and adult choirs and orchestras. Come to the Main Square or Klarisky and see for yourself.

Knights at Devín (1.6. 6.7., 3.8., 31.8.), a project by Tovarišstvo starých bojových umení a remesiel (The Guild of Old Martial Arts and Crafts), will bring you back to the world of the Middle Ages. You will surely appreciate period dances and music , a knight tournament on horseback, swordsmen, falconers, and the premiere of the performance – Capturing of the Richard the Lionheart.

In cooperation with the Bratislava City Museum, the event Talks from the Old Town Hall with the historian ŠtefanHolčík will take place on June 12. The event will be devoted to the stories of the historic center of Pressburg.

A unique exhibition Parta in the 21st Century (August 12 –September  8) takes place in Klarisky. You can look forward to a collection of paintings depicting parta (a unique Slovak head garment for women) that uniquely combine photography, facepainting and artistic painting. It is a magnificent joint project of photographers Ľubomír Saba and Zuzana Sénašová, painter Sarah I. Avni and ethnologist Katarína Chabrečeková.

At the end of August, visitors of the capital can look forward to the festival of traditional crafts and folk products – The Days of Masters – ÚĽUV (August 31 – September 1). The event takes place in the streets of the Old Town and presents traditional crafts from all over Slovakia to the general public.

THEATER AND SPORTS FOR EVERYBODY

The Old Market Hall will hold the event the Municipal Theater TRH – PIAC – MARKT during which visitors can enjoy different fairy-tales every Saturday.

The oldest and greatest open-air theater show in Europe is the Summer Shakespeare Festival (July 5 – August 4), dedicated to William Shakespeare’s works. The event will kick-off with Romeo and Juliet, the greatest love tragedy of all time (directed by Dodo Gombar). The event will also hold a premiere of the Twelfth Night or What You Will by the Prague ensemble directed by Jana Kališová. You can also look forward to The Comedy of Errors after last year’s sold out performances, as well as the last performance of the unforgettable Othello.

The Cultural Summer and Castle Festival will also hold the 16th annual event <bratislava – inline>, designed for fans of evening in-line skating and cycling for everyone, regardless of age. Organized city in-line and bike rides will be held every Friday evening (starting from June 28). 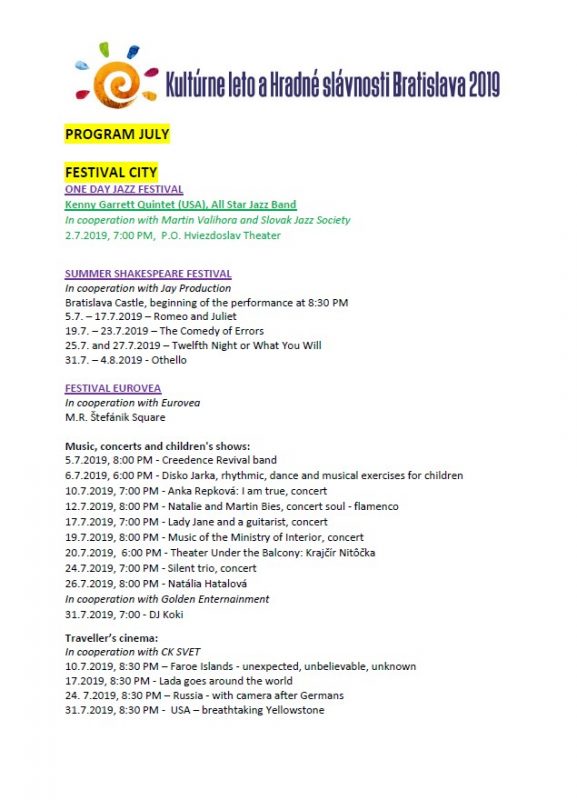 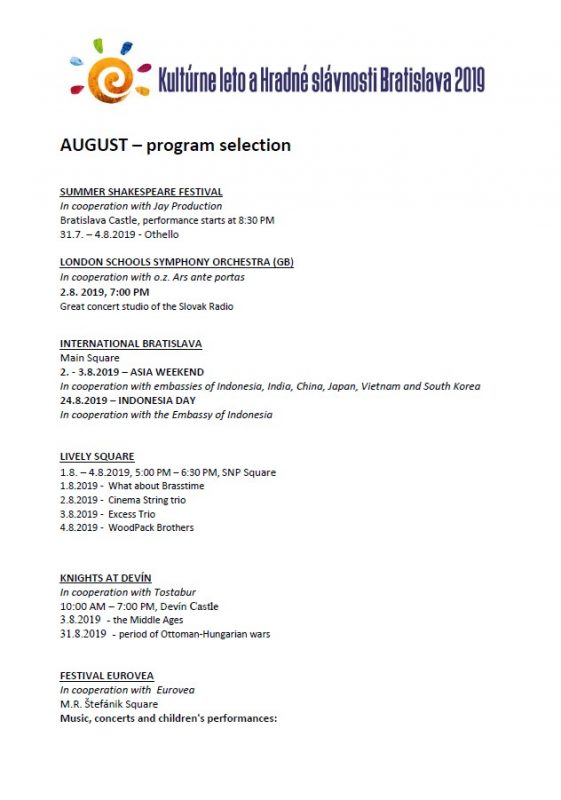 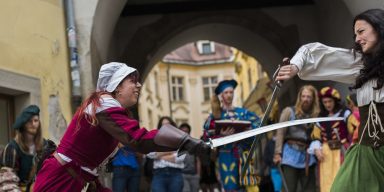 Become Part of the Coronation Period 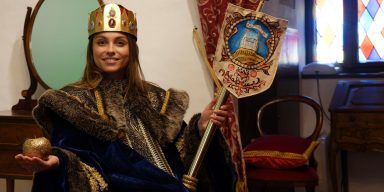