The monumental statue on the Danube embankment is the most outstanding tribute to Milan Rastislav Štefánik in Bratislava. This versatile man was not only a successful astronomer, but also a general and a politician who was instrumental during the creation of the first Czechoslovak Republic. Commemorate the 100th anniversary of his death in several locations throughout Bratislava and in the place where a tragic air crash ended the life of this great man.

“Štefánik was a remarkable personality. In addition to being a key person in the founding of the first Czechoslovak Republic alongside Tomáš Garrigue Masaryk and Edvard Beneš, during his short life he achieved an astonishing amount of work in other areas, too,” recalled James Thomson, a British journalist living in Slovakia.

As an astronomer, Štefánik participated in expeditions in the South Pacific and Spain. He was also a talented photographer. During World War I, he joined the French army and became its general and was also instrumental in organising Czechoslovak legions. He was vice-chairman of the Czechoslovak National Council and served as Minister of War in the temporary Czechoslovak government and subsequently the newly-established republic.

On May 4, 1919, Štefánik’s plane crashed at the airport in the village of Ivanka pri Dunaji, just a few kilometres from Bratislava. He was only 38 years old. Today, a granite mound from 1923 commemorates this event. The mound was designed by prominent Slovak architect Dušan Jurkovič, who is also the author of a larger and more famous mound above the Štefánik’s native village of Košariská on Bradlo Hill.

A 3.3-kilometre cycling trail suitable for families with children starts in Bratislava and leads to the mound near the airport. The place is also easily accessible via an asphalt road from Ivanka pri Dunaji. 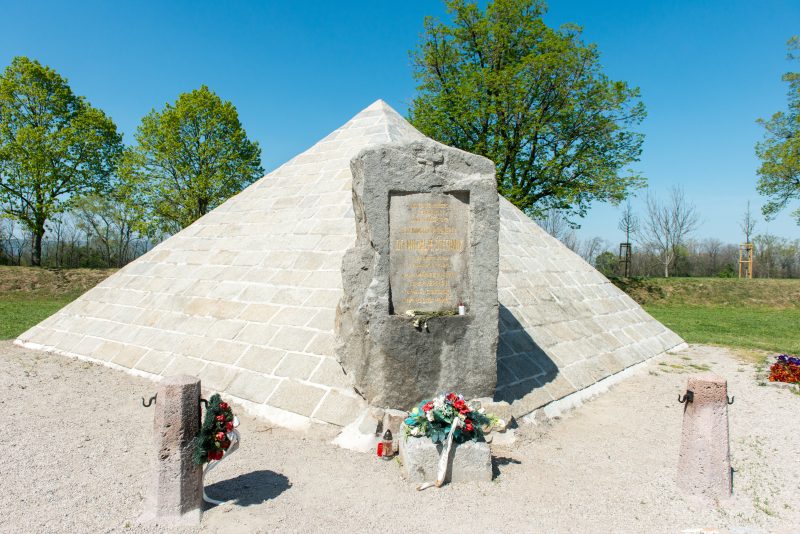 Today there are several places in Bratislava associated with Štefánik. Not only Bratislava’s boulevard, which leads from the presidential palace out of the city towards the Main Station, but also part of the Danube embankment near the Eurovea shopping centre bears his name. Here stands the most famous sculpture of Štefánik with a lion symbolising Czechoslovak legions. Visitors can enjoy a view of the memorial from the terraces of restaurants and cafés flanking the embankment.

Originally, however, the memorial stood on today’s Štúrovo Square. Since neither representatives of the war-time Slovak State, a satellite of Nazi Germany, nor communist bigwigs liked it, the lion was removed from the memorial in 1940. Štefánik’s statue followed in 1954. Rumours have it that when trying to tear down the statue with trucks, workers only tore off its head. Therefore, the engineers blasted the statue by dynamite. 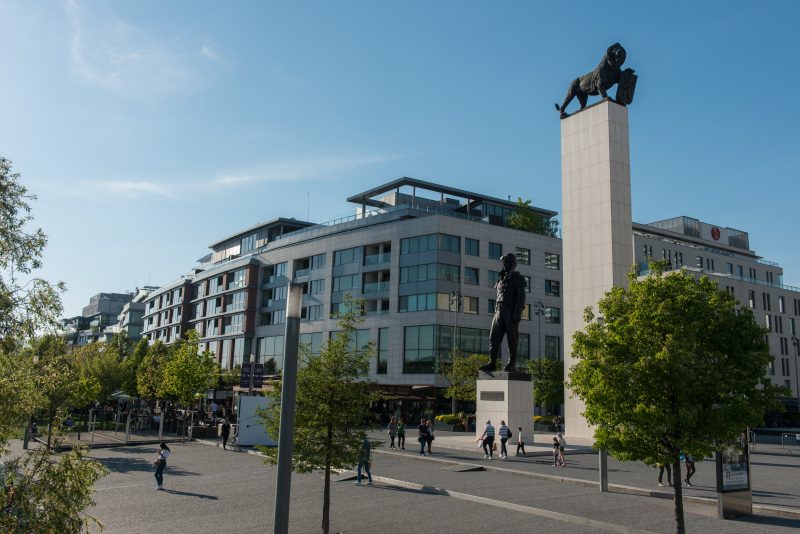 The monument was gradually returned to the public space only some decades later. The four-metre lion statue was reassembled, and in 1988, it was installed on a 15-metre pylon in front of the Slovak National Museum on Vajanského Nábrežie. In 2009, together with a copy of the original 7.5-metre Štefánik statue, the monument was placed in its present location in front of the new building of the Slovak National Theatre.

The Caproni plane hangs at the airport

Another statue of Štefánik stands at the Bratislava Airport, which was named after him in 1993.

The airport’s departure hall has been decorated with a genuine replica of the Caproni Ca 33 biplane, on which Štefánik crashed, since 2012. The partially revealed fuselage and wings of the replica hanging on steel ropes show how fragile aircrafts were at that time.

The skeleton of the aircraft was wooden, covered with canvas and reinforced with steel ropes. When it was in active use, this Italian bomber was able to fly at a maximum speed of 130 km/h, while a full tank of fuel was enough for four hours of flight. 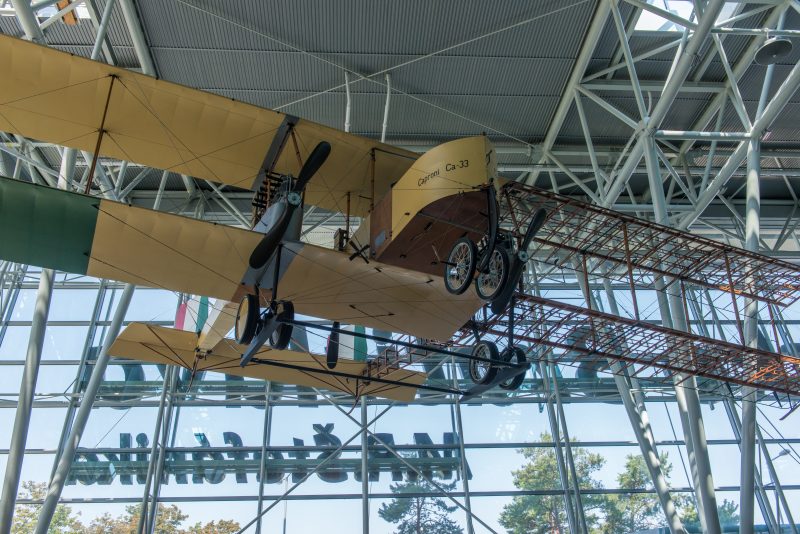 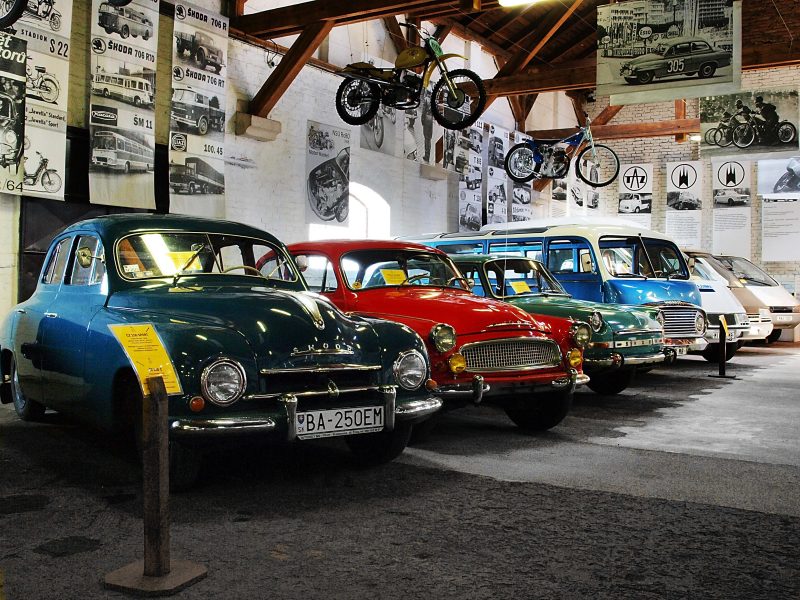 Those interested can see what other means of transportation of persons and goods were used at that time in the Museum of Transport, located in the premises of the Bratislava’s first steam-engine railway station from the 19th century. Holders of the Bratislava CARD City & Region tourist card get a 50 percent discount on admission. 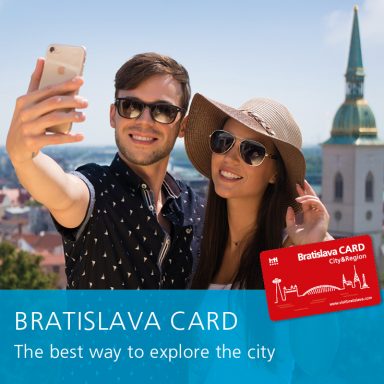 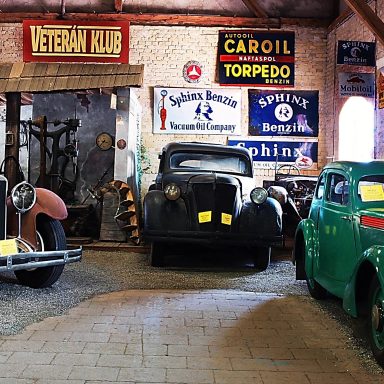