The bulbous yet elegant copper roof of Michael’s Gate is one of the symbols of Bratislava.

Since 1 December 2020, Bratislava City Museum is closing the Michael’s Gate – the Museum of Weapons for approximately two years. The reason for the closure is the long-awaited general renovation of an architecturally rare building in the historic city center.

The roof of the original gothic tower, built in the mid 14th century, was modified between 1753 and 1758 to give it its current, baroque style. The 51 meters tall tower has seven floors, and the superb view of the Old Town from the upper terrace of the tower is one of Bratislava’s top visitor experiences.

At the top of the tower is a statue of the archangel Michael, slaying a dragon. Entrance to the tower is via the Museum of Arms; look for the replica cannon at ground level. On the street that passes through the gate is the so-called “zero kilometre” plate, listing the distances of 29 world capitals from Bratislava.

Take part in period coronations and “Become a Royal” at the Coronation Photo Video Point at the ground floor of Michael’s Gate (from June to September). Michael’s Gate was an integral part of the coronation route followed by the kings who were crowned in Pressburg as they left the city to where they would take their oath. The Coronation Photo Video Point is where you will find rooms with period furnishings and an authentic 3D model of the historical city marking the route coronation processions took. You can make an image and upload a video of yourself in period costume with the coronation insignia and become a part of a historical exposition. You can record both a photograph and video displaying a scene from the coronation and then print or share it with your friends through e-mail. 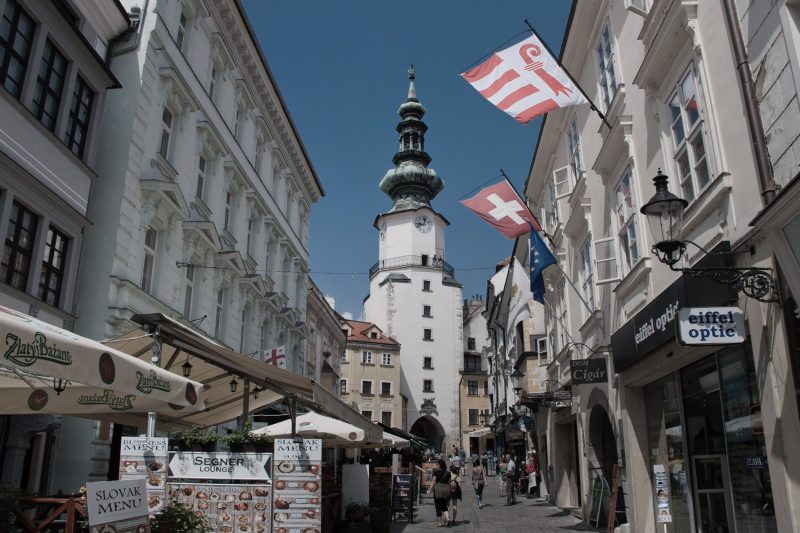