The circumstances connected to the origin of the castle are not completely known. Some historians prefer the theory that the Pajstun castle is in fact the Stupava castle, conquered by the troops of the king Ottokar II of Bohemia in the year 1271.

History of the Castle

In favour of this theory is often pointed at the fact that the village Borinka is even today an inherent part of the district Stupava. According to another, more probable theory was Pajstun a property of a certain Rugerius of Tallesbrunn, built in the last third of the 13th century. Its German name “Peilenstein” evolved under the influence of local dialects in the frame of centuries into Pajstun. It is certain that the construction of the castle was completed before the year 1390, when the king Sigismund donated Pajstun to the Dukes of Svaty Jur and Pezinok. In the year 1543, after the extinction of the dynasty, became its new owner Gaspar Seredy. Its another owner, the Pressburger intendant Eck Salm, obtained it in the year 1552 directly from the king Ferdinand I and 40 years later was Pajstun donated to Mikulas Palffy, one of the High Commanders of the Austrian Imperial Army. The first half of the 17th century marked for Pajstun a period of prosperity.

Pavol Palffy, the son of Mikulas Palffy and the paladin of Hungarian kingdom, ordered its large-scale renovation, performed under the supervision of the best fortification specialist of that time. Approximately 100 years later was the castle during a violent storm badly damaged by a heavy fire caused by a lightning. Despite this damages was Pajstun still habitable. The last chapter in the history of Pajstun was written by French troops. The castle was conquered in the year 1809, during the French-Austrian war and the French troops were ordered to destroy it by a heavy load of explosives.

The current appearance of the castle

On the glorious past of Pajstun remind today only fragments of its walls. A tower armed with large guns, located in the northern section of the castle, was built in the 16th century as a reaction to the imminent danger of the Osman attacks. The tower guarded the entrance portal and the central objects of the castle. The complex was during the reign of the Palffy dynasty completed by a manor and bastions of the outer perimeter, having been situated in the western section of Pajstun. At the existence of the manor in the southern section of Pajstun point only its ruins and rests of an underground water tank. Ascending Pajstun, you can enjoy a beautiful panoramic view of the surroundings of Pajstun, reaching to the Austrian Alps.

How to get there?

The ruins of the Pajstun castle are situated in the cadastral territory of the village Borinka in the Small Carpathians. The shortest alternative for a trip to Pajstun is to start it from the village Borinka. Traveling to Borinka by a car, you can leave it on a parking area directly in the village. The red flared trail begins nearby the church in the centre of the village, passes a small forest, a meadow, and ends at Pajstun.

If you start from Bratislava, take the bus line number 37 of the Public Transport Bus Service, ending its route in Zahorska Bystrica. Being in Zahorska Bystrica, you can choose between two alternatives: the blue blazed trail that leads you to Pajstun and further to Marianka or the red blazed trail directly to Pajstun. For more information on the bus line number 37 click on the link HERE.

The route from the Bratislava district Raca is the longest (4 to 5 hours), but also the most beautiful one. Take the green or the blue blazed trail beginning at the swimming pool “Zbojnicka” that both lead you to Medene Hamre and then follow the yellow blazed trail to Draci hradok (the Dragon’s Castle) and subsequently take the red blazed trail. 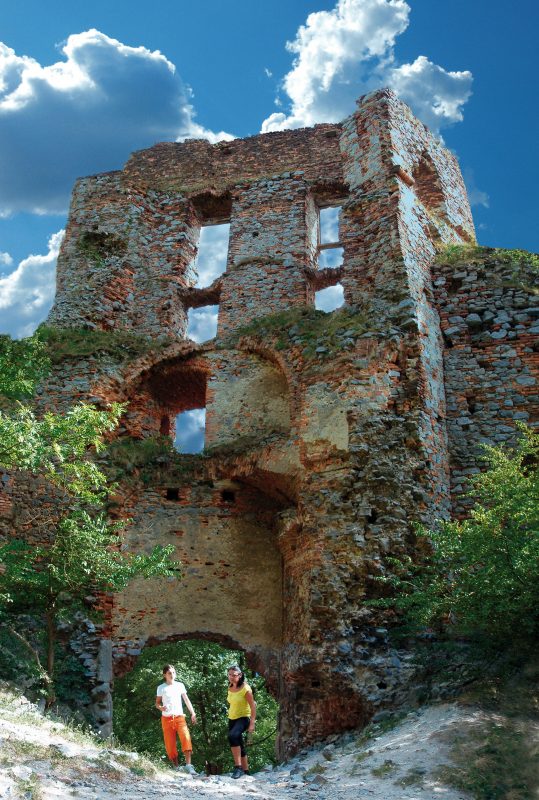