A concert under the auspices of Peter Dvorský

The opening year of the project “Opera Choirs“ produced by Opera Slovakia, a civil society, which popularises the opera art, invites you to a closer insight into the colourful world of diversity of expression of the choirs in the opera history and through this concert introduces the opera choir production as a separate kind of music literature.

In the beginning of the concert the chorale and double chorus with the mezzosoprano solo „Regina coeli – Innegiamo“ from Mascagni’s opera Cavalleria rusticana evokes a spiritual atmosphere. The tones of five choir performances from Puccini‘s top opera Turandot lead the visitors of the concert to the distant China. The block of three opera choirs by Giuseppe Verdi is opened by the expression of the wish for freedom in the famous Prisoners’ Chorus from the opera Nabucco. The stormy introduction of the opera Otello follows. The musical storm is replaced by the sun glitter of the triumphant fanfares of the impressive Grand Finale of three choirs from the opera Aida. In the rhythm of the castanets from Bizet‘s Carmen we visit the Spanish corrida heated by the sun. From the Russian literature will follow five temperamental Polovtsian Dances from Borodin‘s opera Prince Igor, which reveal the oriental folksiness of the Caucasian and Russian music. The concert is closed by the still inner pain of the Finale of Mussorgsky’s opera Boris Godunov. 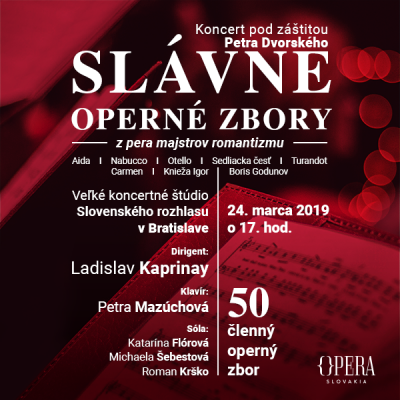