6. Clarissine Church and the Convent of Poor Clares

A complex of sacral structures among the oldest and most prominent of the Gothic and Renaissance periods. Throughout their long history they have seen many uses – a place of worship, a hospital, a poorhouse, a law academy and a grammar school. The former convent building is currently home to the University library and the church is used as an exhibition and concert venue.

7. The oldest shop in town – shop in a museum

Travel back in time when you visit this shop. You are met by the feel of old Bratislava at the turn of the 19th and 20th centuries, discovering, for instance, a traveling salesman’s suitcase, an ice cream dispenser from 1910, or soap that was used for washing hands. Come and absorb the history and leave with a souvenir in the form of one of the prized, traditional products of Bratislava.

Have you ever pondered what infinity looks like? Come to the MULTIUM gallery of mirrors and you can admire the beauty of physics through the six mirror art expositions. Accept our invitation to the unforgettable journey to infinity!

The present-day street called Palisády was originally a path winding its way between the city’s outer defenses (a palisade built from wooden stakes) and its vineyards. Later, in the second half of the 19th century, the wealthy and notable burghers began building their mansions here. Immerse yourself in the atmosphere of old Pressburg and walk the streets and lanes heading up to the Slavín monument. You will be rewarded with a spectacular view and the unmistakable atmosphere of one of the most affluent quarters of old Bratislava.

An unassuming building on Nedbalova street conceals this unique gallery specializing in 20th century modern Slovak art, with both permanent and rotating expositions. The gallery deserves its nickname of the “Slovak Guggenheim”, given that it shares its interior design and mission with The Guggenheim in New York City. 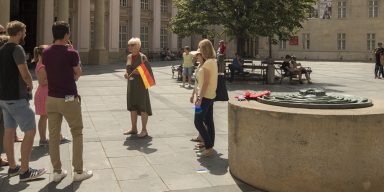