Are you looking for a quiet place to relax in the middle of the city? Then make sure you check out the Presidential Garden, located directly behind the Grassalkovich Palace. Children will enjoy the wooden playground, swings, or the train while the grown-ups can relax in the shade of the trees, many of which have been planted by presidents of other countries on their visits to Slovakia.

Another hallmark of Bratislava from the Communist regime is the Slovak Radio building, completed in 1983. This “inverted pyramid” is intriguing from an architectural point of view and was justly awarded Slovak Structure of the Century in the Community building category.

9. The Museum of Jewish Culture

The Museum of Jewish Culture in Slovakia is located in the 17th century Baroque Zsigray Mansion on Židovská street. The exhibits document the rich cultural life and traditions of the Jewish denizens of Bratislava. Explore this unique history and culture via these rare artefacts. The highlights of the exhibition include the furnishings of a synagogue and the gallery of notable Jewish figures of Slovak origin.

The Transport Museum is to be found in the premises of the first Bratislava railway station and rail-yard of the steam railway which was part of the Hungarian central railway in the 19th century. Nowadays, the museum exhibits artefacts of road and rail transport – carriages, bicycles, motor vehicles, steam, diesel and electric locomotives and many others. 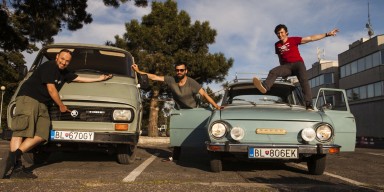