The Slovak capital recalls its royal past once again

For almost three centuries, the former Pressburg served as the coronation city of the Hungarian kings. At that time, it was also the capital of Hungary.

Today, Bratislava remembers this epoch every year during the Bratislava Coronation Days. For a few days, the city offers an extraordinary atmosphere that transports its visitors to the time of the coronations of important monarchs.

This year, you can experience the coronations as they once looked on the last three days of July. A coronation procession will parade through the streets of the city; the participants wearing historical costumes and props will put you in the right mood. When the procession makes a stop in the heart of the historic city centre, the National Bank of Slovakia will present a commemorative coin issued on the occasion of the 450th anniversary of the coronation of Emperor Rudolf II as King of Hungary. The main attraction of the festivities is a magnificent medieval knights’ tournament on the riverbank of the Danube. 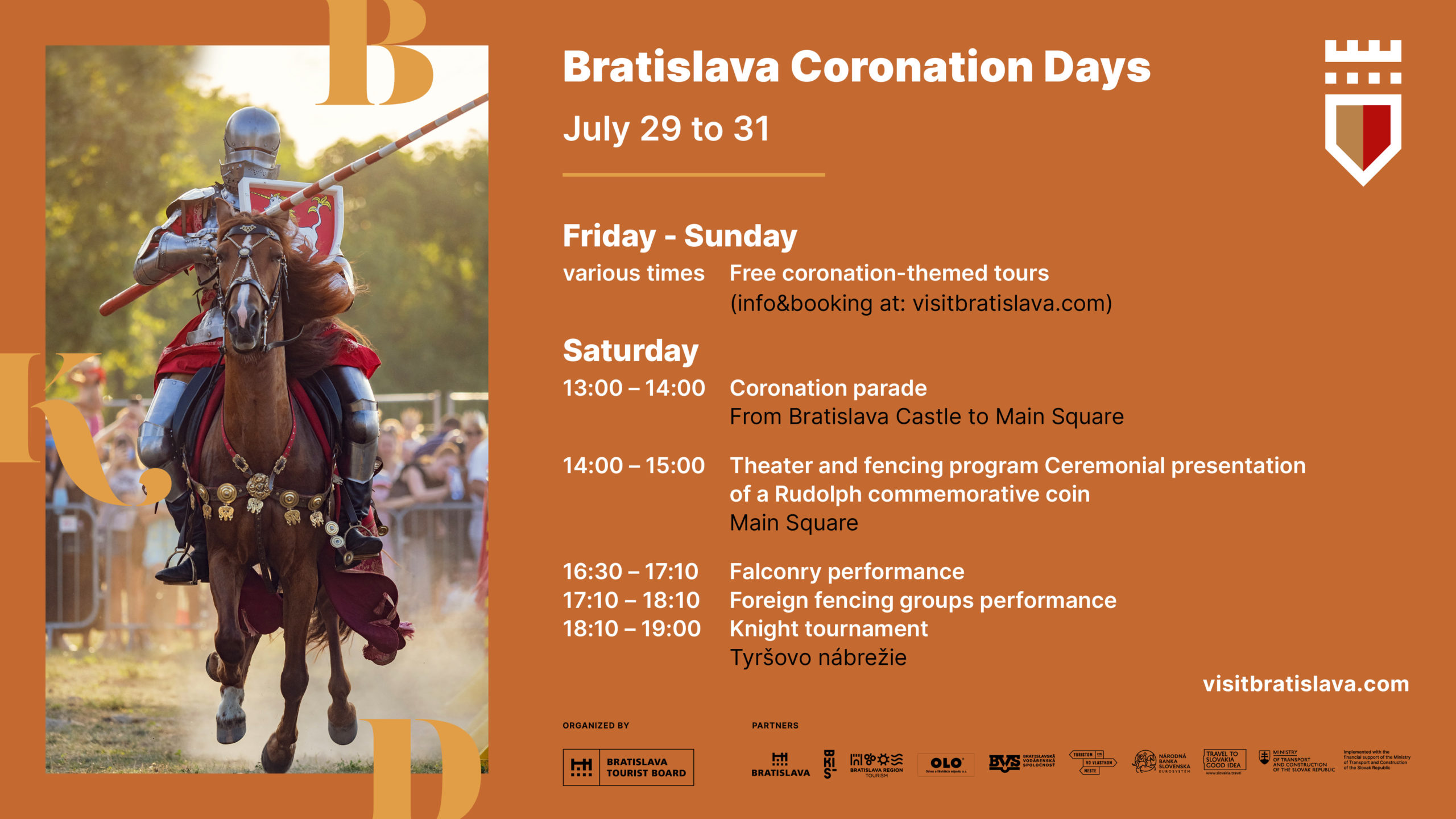 Bratislava Tourist Board also offers the opportunity to stroll through the city on all three days of the coronation celebrations and to learn something new in the process. To take part in the free commented guided tours, which are called “In the footsteps of coronations” and offered in five different languages, you only have to register and then come to the specified meeting point. This year’s Coronation Days will again offer a lot of interesting things, so come and let us guide you through festive Bratislava.

This year, you can choose from three different routes. The routes lead either from Bratislava Castle to the place where the Coronation Hill was once located, or from the cathedral where the actual coronation ceremony took place to the Castle, or from the cathedral to the banks of the Danube, where the knights’ tournament takes place. All of the tours are one and a half to two hours long.

The first route leads from Bratislava Castle through the Baroque Garden and St Nicholas Gate to Beblavý Street, and then around the Holocaust Memorial to St Martin’s Cathedral and on via Chapter, Provostal, Ventúrska, Michael’s and White Streets around the Franciscan Church to Main Square and from there via Hviezdoslav Square to Ľudovít Štúr Square, where the Coronation Hill was located. This tour is only available in the Slovak language. You will find the tourist guides at the specified time next to the statue of Svätopluk in front of Bratislava Castle. 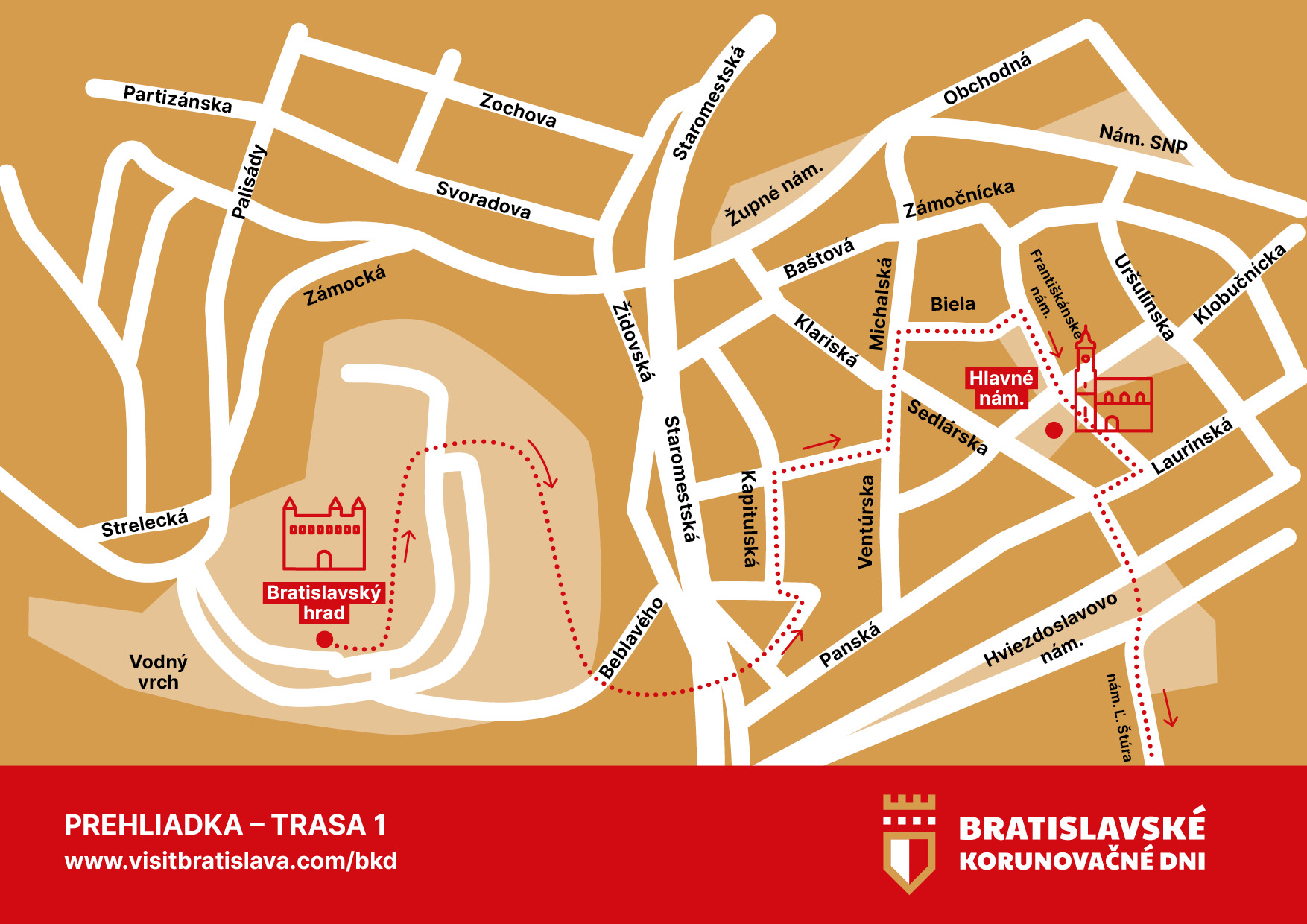 The second route leads from Rudnay Square via Provostal, Ventúrska and Saddler Streets to Main and Franciscan Squares, and from there via White, Michael’s, Capuchin and Castle Streets to the Castle. The guided tours on this route are available in Slovak, Ukrainian and Hungarian. The meeting point with the tourist guides will be the Anton Bernolák Monument on Rudnay Square in front of the cathedral. 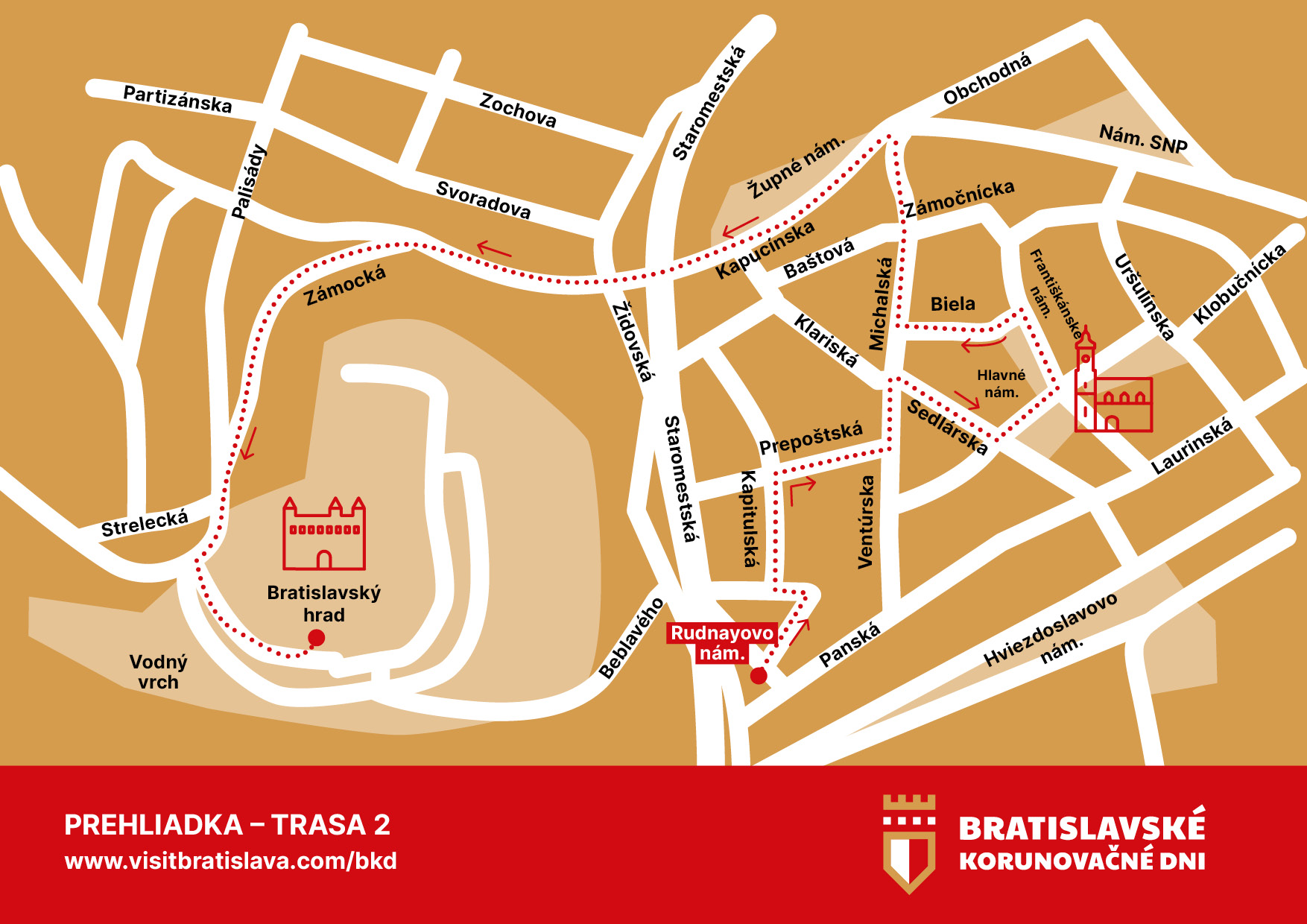 The third route leads from St Martin’s Cathedral via Chapter, Provostal, Ventúrska and White Streets to Franciscan and Main Squares, and then around the former Fisherman’s Gate to Ľudovít Štúr Square and finally to Tyrš Embankment on the right bank of the Danube, where the knights’ tournament takes place. This tour is available in Slovak, English and German. The meeting point with the tourist guides is again the Anton Bernolák Monument on Rudnay Square in front of the cathedral. 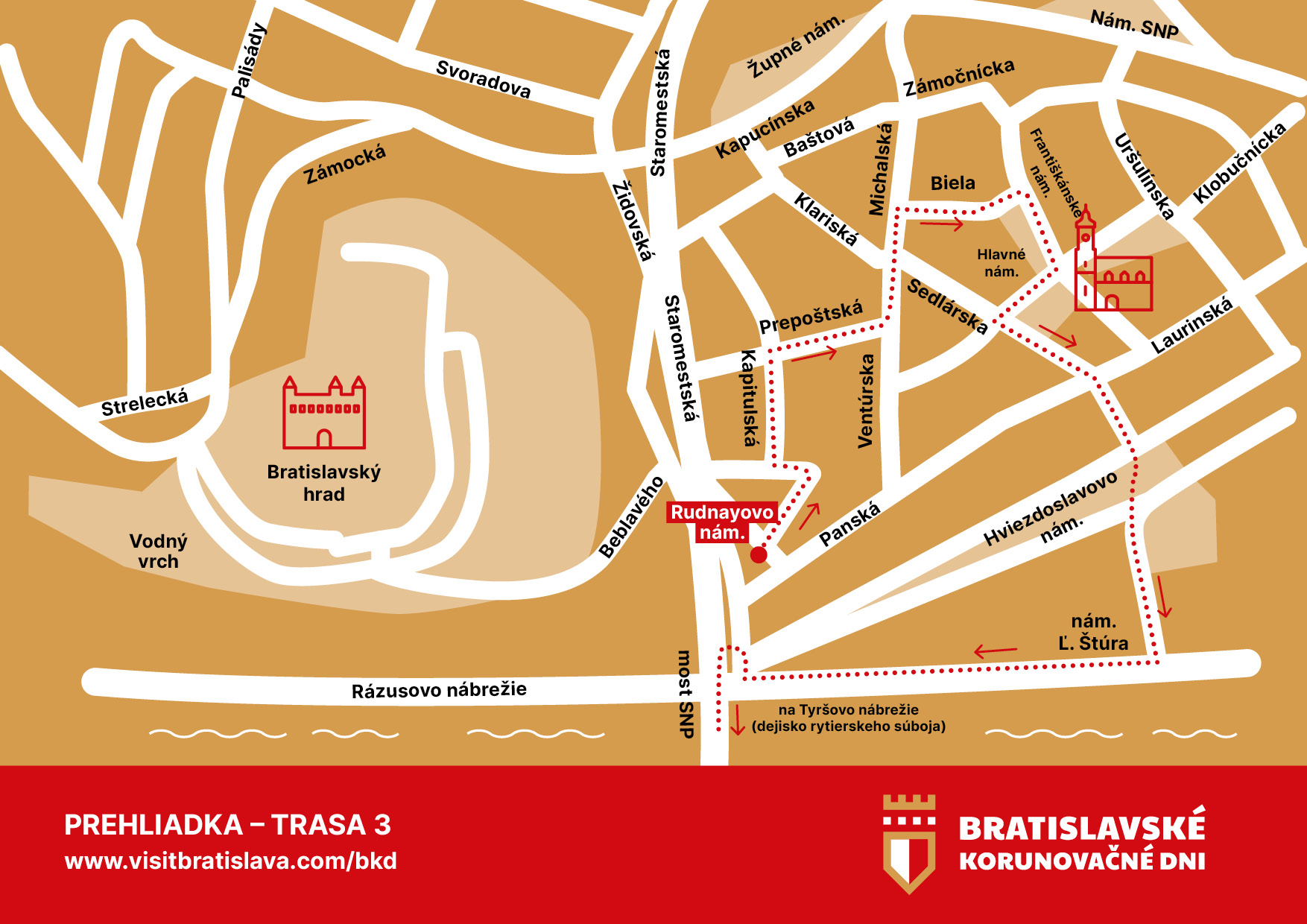 On Friday and Sunday, you can take the first route from the Castle to Ľudovít Štúr Square. At the statue of Svätopluk in front of Bratislava Castle, Eva Čubríková will be waiting for you on 29 July at 5:00 p.m. and Adelinda Ježovicová on 31 July at 11:00 a.m. Both will take you through the most important places associated with the coronation of Maria Theresa, with commentary in Slovak. You can learn many interesting facts and historical contexts listening to them. 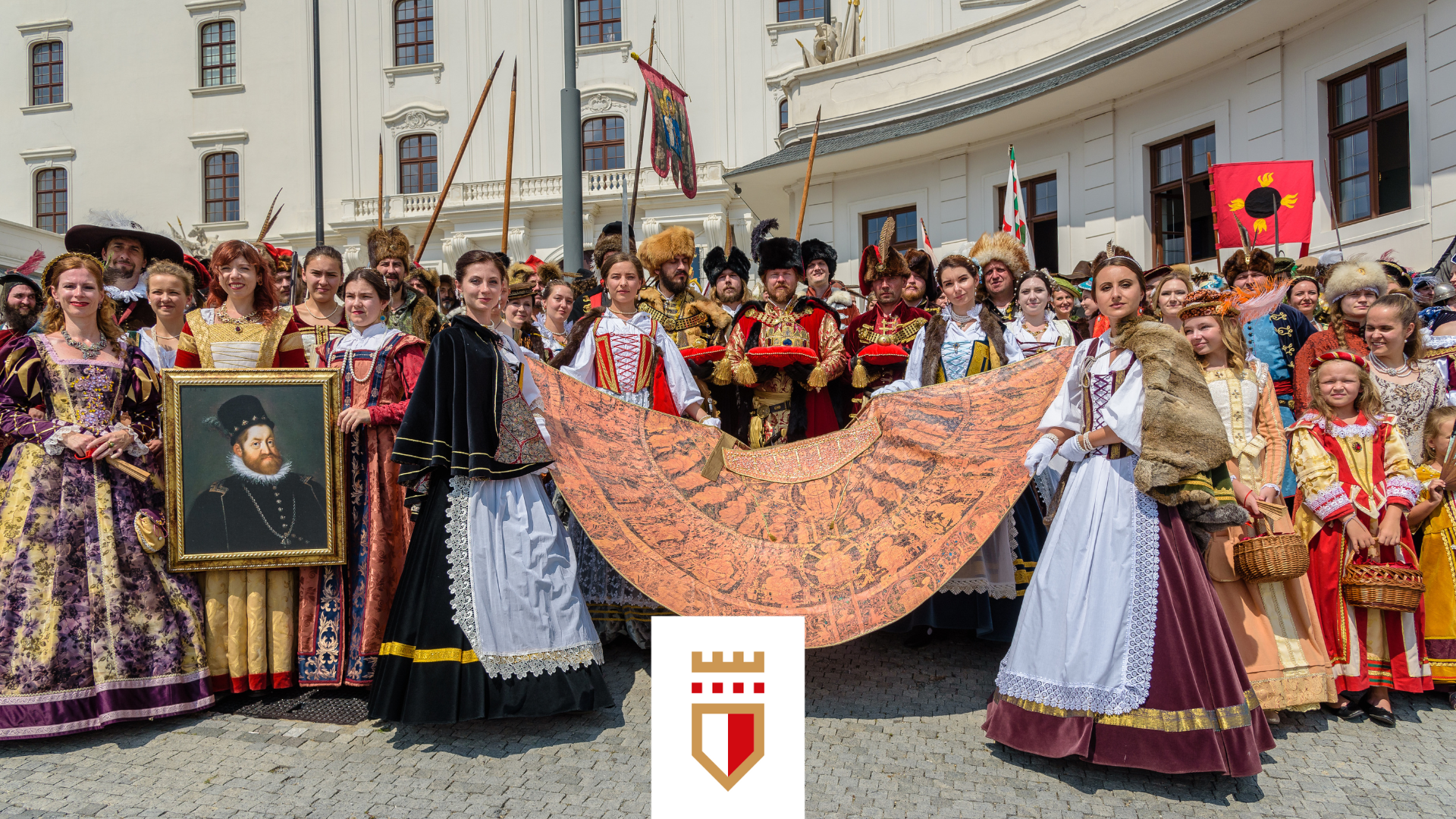 The themed tours dedicated to the famous coronation history of the city also take place in Ukrainian this year, namely on the second route on Friday and Saturday. These tours are led by Halyna Holinková, who will be waiting for you in front of the Anton Bernolák Monument in Rudnay Square: on 29 July at 5:00 p.m. and on 30 July at 10:30 a.m. She will talk about the customs of the coronation days and the importance of Maria Theresa for the history of Bratislava. 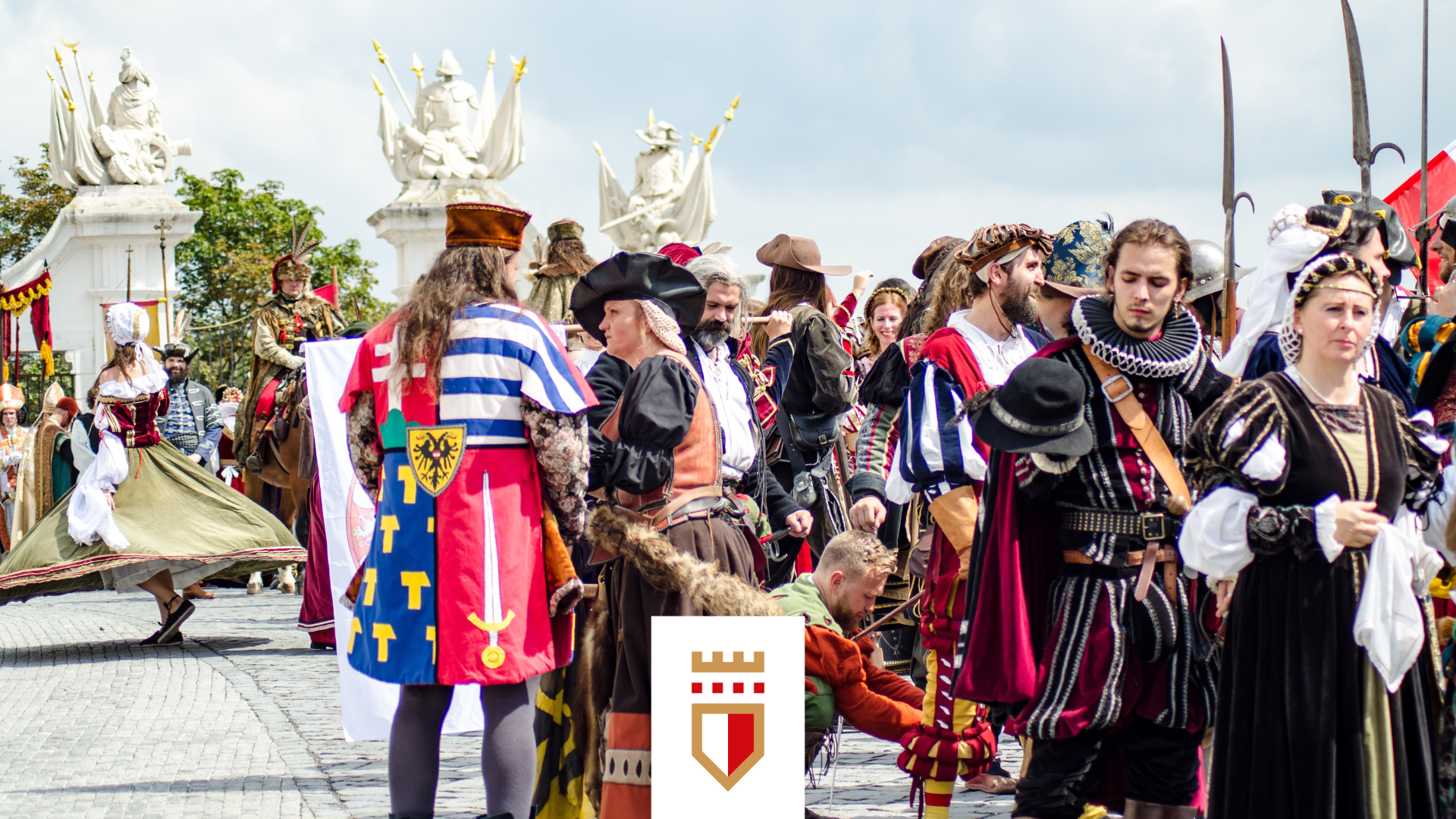 Do you know why Bratislava was a coronation city? How many kings and queens have been crowned here? Where did the actual coronation take place? Why couldn’t Maria Theresa’s husband attend the main part of his wife’s coronation? Where is the largest crown of King Saint Stephen located? How many brass crowns can be found on the pavements of Bratislava’s Old Town? You can find this out and a lot of other interesting information about coronations in the Slovak capital during a walk along the second route of the coronation tours with Ľubomíra Černáková on Saturday, 30 July. She will be waiting for you at 10:30 a.m. at the Anton Bernolák Monument in front of St Martin’s Cathedral. 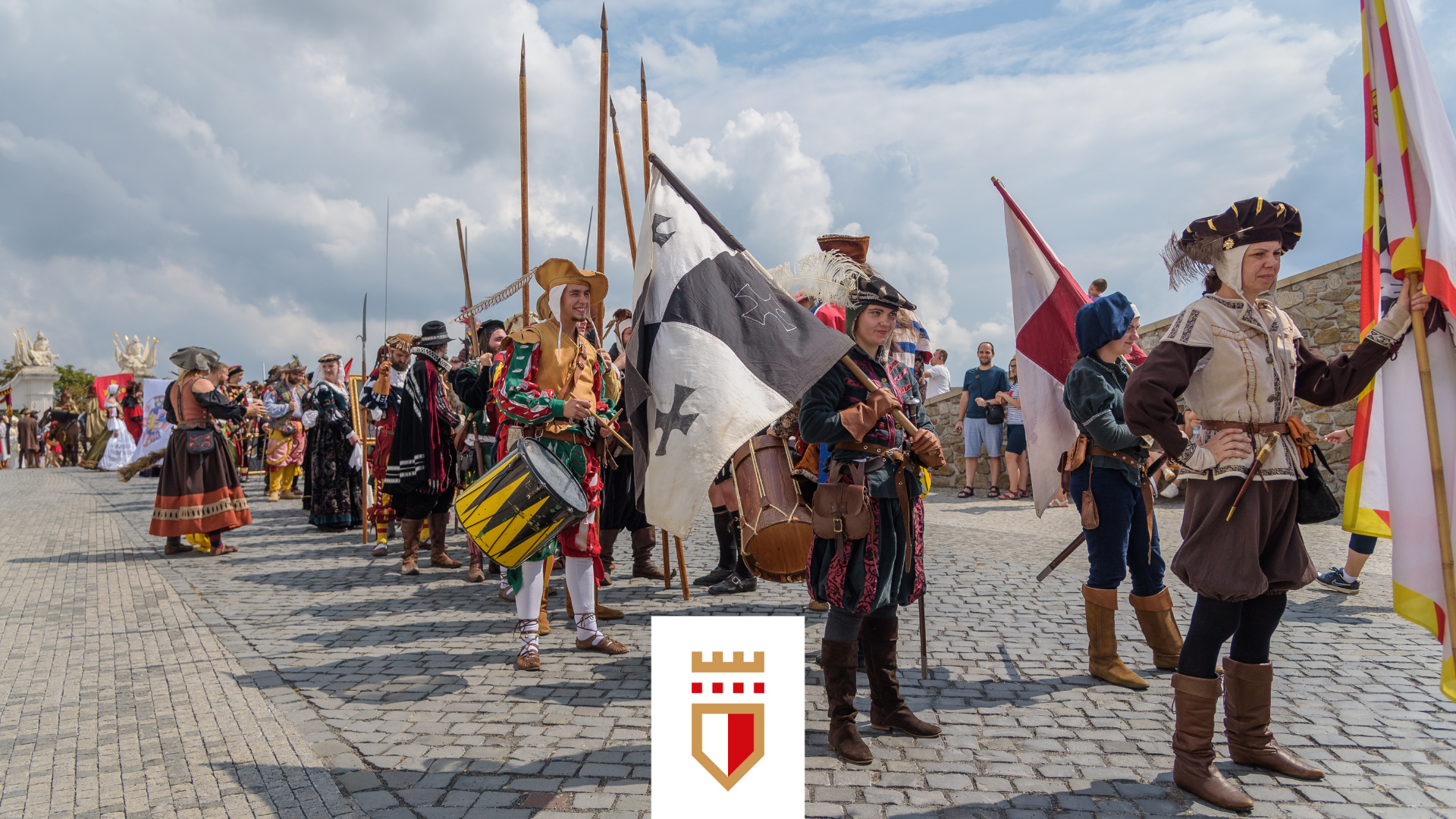 The Hungarian guided tour, led by Júlia Loviseková, starts on Saturday, 30 July at 10:30 a.m. From the Andrej Bernolák Monument in Rudnay Square, you can follow along the second route in the footsteps of the coronation processions of kings and queens who received the Hungarian royal crown and thus the responsibility for the whole country. You can learn more about the worries and joys of the Hungarian monarchs here, but above all about the fame of the former Pressburg, when it was the capital of Hungary. You’ll end your trip to the past just like the kings and queens – at the Castle. 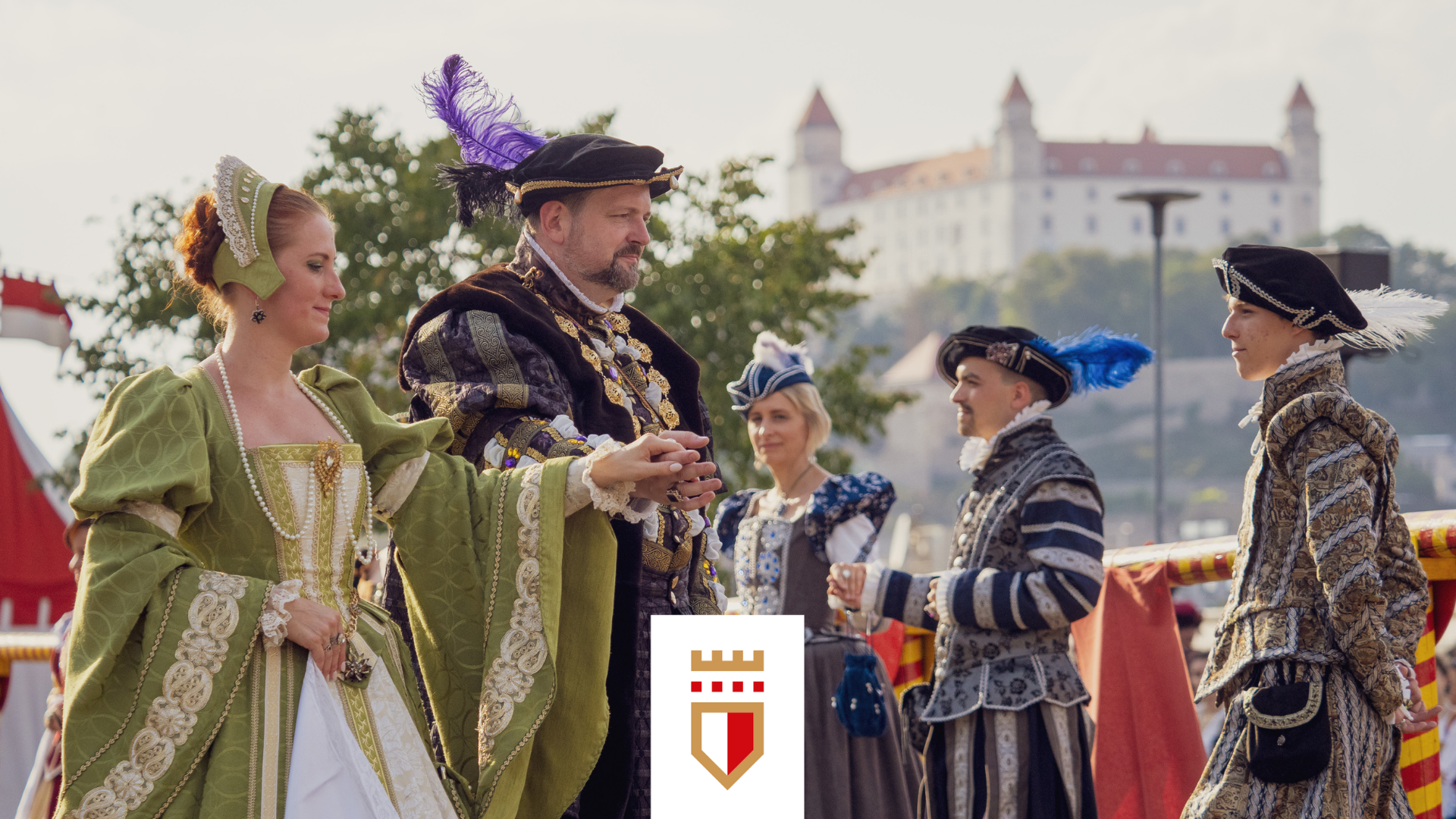 The most important places associated with the coronation of Maria Theresa (and others) can also be visited with professional commentary in German. On Saturday, 30 July, Eva Mojtová will be waiting for you at 3:00 p.m. at the Anton Bernolák Monument in Rudnay Square to show them to you. Together, you will embark on the third route of the commented guided tours on the occasion of the Bratislava Coronation Days, from St Martin’s Cathedral to Tyršovo nábrežie on the riverbank of the Danube. 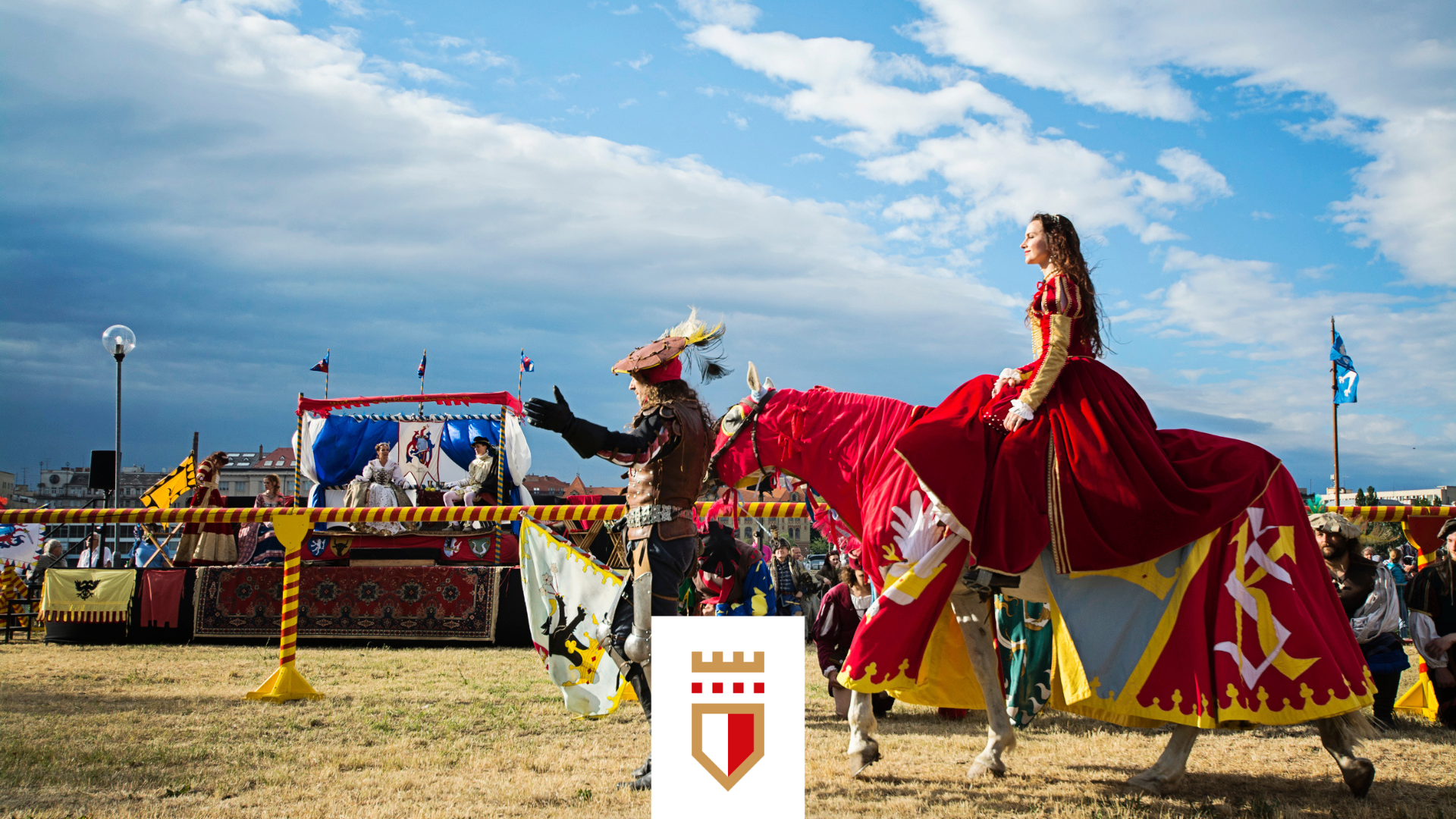 On the same route, Bratislava can also be explored in English. The English tour, led by Adelinda Ježovicová, starts on Saturday, 30 July at 3:00 p.m. From where the Vydrica Gate once stood, you will wander through the ancient alleys of the historic city centre to follow in the footsteps of coronation processions. The brass crowns in the paving will show you the way. 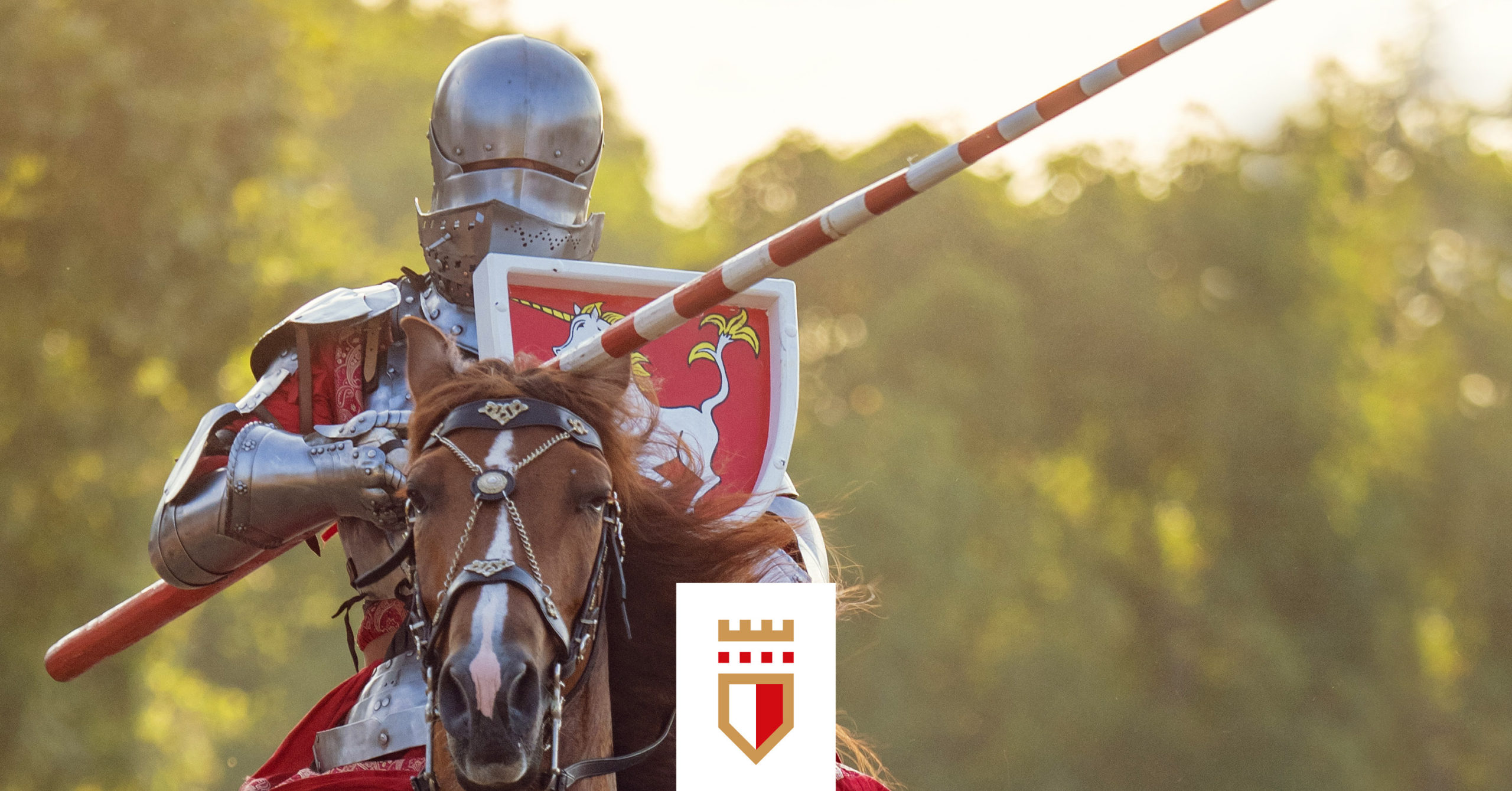 The 18 famous coronations of Hungarian kings and royal wives that took place in Bratislava can also be commemorated in the Slovak language on the third route. The Slovak tour led by Zuzana Godárová takes place on Saturday, 30 July at 3:00 p.m. The exploration of the city begins at the Anton Bernolák monument in front of St Martin’s Cathedral and ends at the knights’ tournament at Tyršovo nábrežie, where you can dive even deeper into the historical atmosphere. 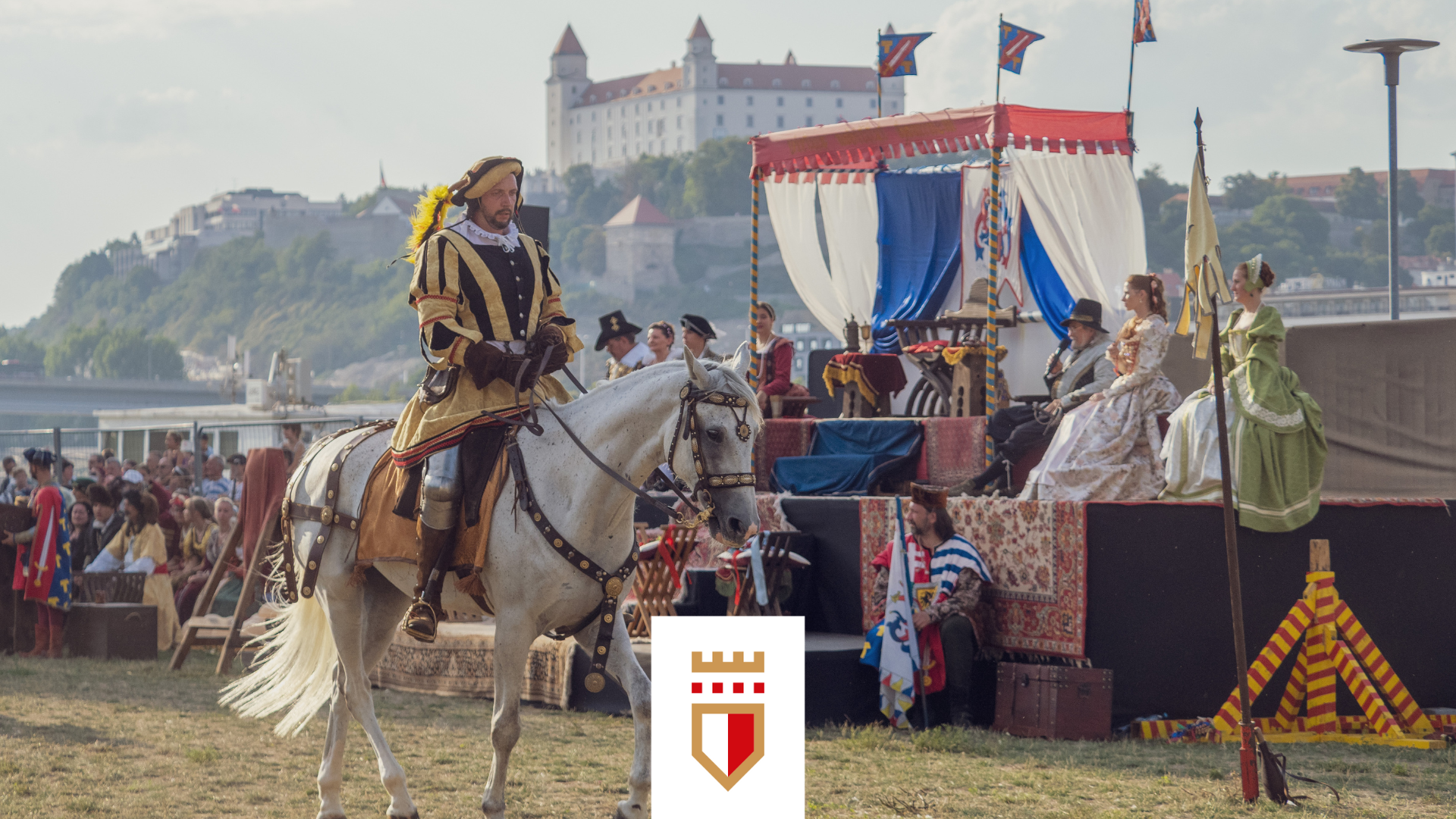 If you like interesting attractions, history and beautiful things in general, then don’t miss the last weekend of July in Bratislava. Visit the Slovak capital during the Coronation Days and experience an unforgettable summer spectacle! 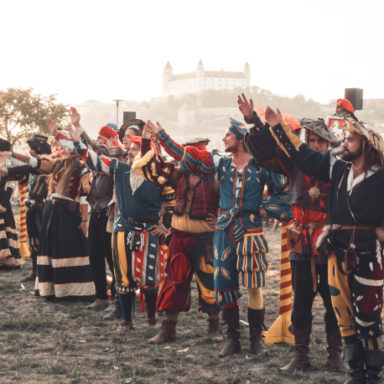 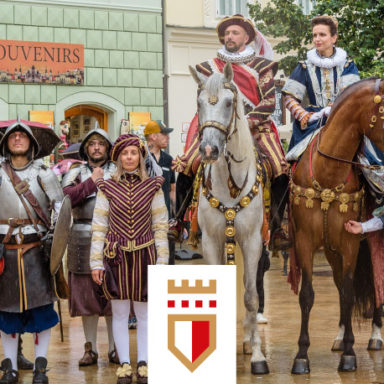 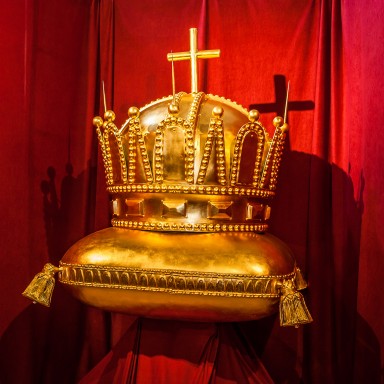